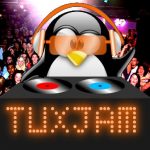 In the second of the Christmas themed episode, Andrew, Dave and Kevie take a look at the BitCoin themed distro Bitkey Linux. With a bonus Christmas present of a UK based voucher site that accepts Bitcoin called Zeek. For those who like to use open source apps on their Android devices, the F-droid app store has been given a makeover in time for the festive season. Everybody remembers those days when family comes around during the holidays and board games were the main order of entertainment, Pushover brings the fun of dominoes without the need to place them down perfectly on a level tabletop.

Along with these we have an array of Creative Commons Christmas tunes: